Helsinki to Saint-Petersburg – May 2

Tonight it was still freezing but Brecht’s mom had given us the tip to not sleep with our coats on but instead put them over our sleeping bags. This really helped and I felt completely refreshed this morning. The sky was clear and blue, a perfect day for hitchhiking to Russia!  We took a tram to the edge of the city and walked for about one hour to the highway, crossing a nice little forest on our way there. We got a ride before we even finished making our destination sign.

Joachim was a baron and a Swedish speaking Finn. He had occupied a pretty high political position in his hometown for most of his life and was now happily retired. He lived in a beautiful landhouse by a big lake with his wife, the baroness Helena. After dropping us of at a gas station the baron gave us some beers. “One should not be sober all the time”, he said. We exchanged telephone numbers and five minutes later we got a call from him, asking if we already managed to get our next ride. When I said no, he told us to stay put and that he would come and pick us up again to show us his landhouse, which was actually on the way to Russia. 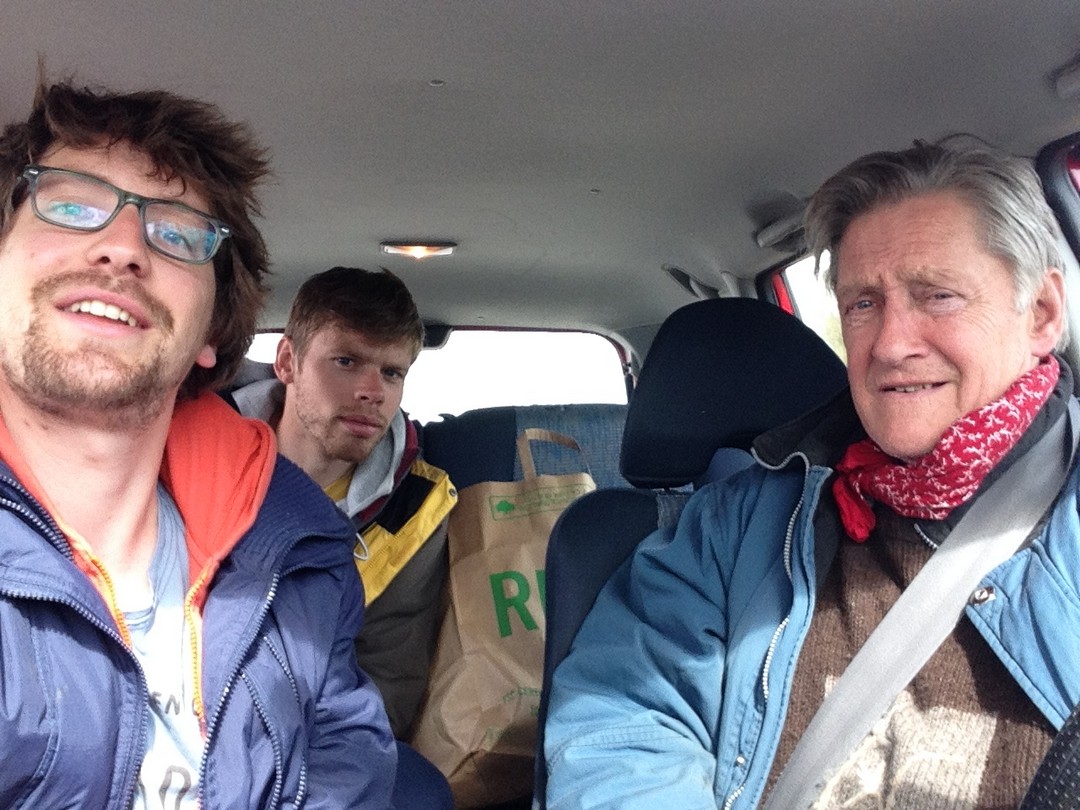 The man gave us a private tour trough his town. Meanwhile a line of drivers was stacking up behind us blowing their horns. But that didn’t seem to hinder the baron because his hearing aid  seemed to filter out the noise. Back at his place he served us some coffee and bread with butter and he told us about his interesting life and family history. After a nice afternoon Joachim drove us back to the main road and dropped us at a bus stop.

The weather had turned and we were now caught in a tiny snow storm. 20 minutes later, after I almost lost all feeling in my thumb, a Russian pulled over. I called shotgun again because my Russian is better then Brecht’s but it didn’t really matter as Sergej spoke perfect English. When we told him that we were headed to Saint-Petersburg he wanted to check our passport and visa to make sure he wouldn’t get any trouble at the border. While driving Sergej told us some horror stories about people having to wait for 6 hours before they could cross the border. Luckily the entire procedure took us just under one hour, and after some commotion about my passport not having any stamps from Finland, they finally realized that EU-citizens don’t need an international passport to enter fellow EU countries, and we were good to go. 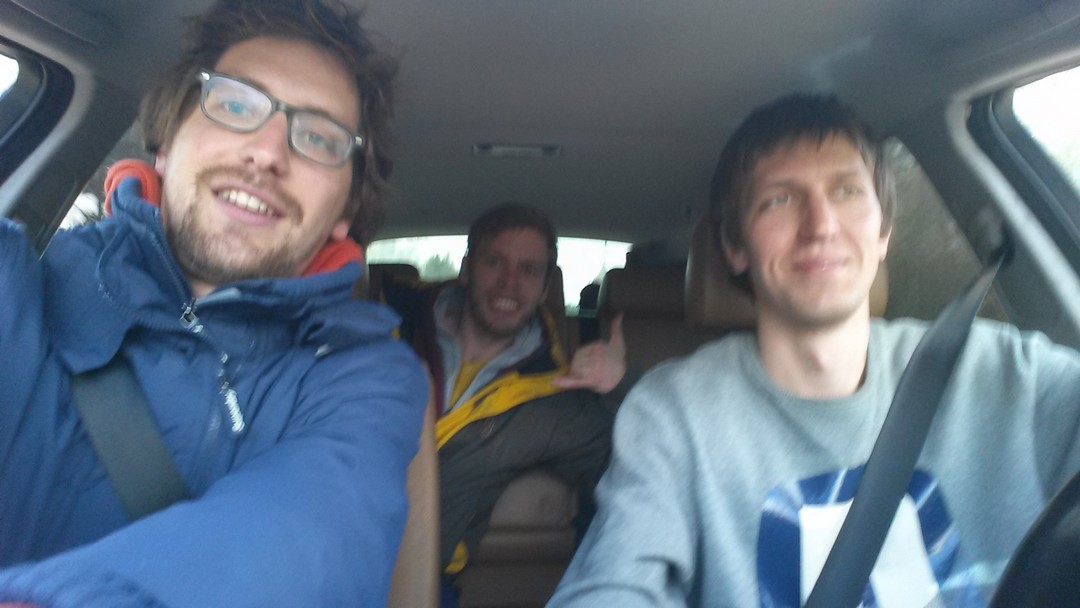 Sergej in his BMW

Sergej had Finnish plates on his car and all the way trough Finland he had been driving pretty responsibly. But now that the camera’s couldn’t register his plates anymore he started driving at an average speed of 170 km/h on some of the crappiest roads we had seen in weeks. While overtaking traffic like a madman he explained that he once made it from Saint-Petersburg to Moscow in under 6 hours. When I pulled out my phone to take a picture he asked if I was going to make a video for Youtube. A part of me, that was considerably more mature than the rest of my brain, realized that the last thing this guy needed was more encouragement, so I told him that I would rather stay alive then get over a million hits on Youtube for a snuff movie in which I would play a main role.

After driving for a while we were getting very close to SPB. When I asked him how much further he would take us, he realized he had missed his turn and he quickly dumped us by the side of the road. We could see a sign indicating a gas station 3km away, so we started walking because it was getting dark and I didn’t feel like sleeping in the woods and get eaten by a bear, in case nobody would pick us up before nightfall. While we were walking, thumbs in the air and dodging cars by running towards the woods every time a crazy driver was overtaking a truck over the hard shoulder, suddenly a car with all windows blinded drove towards us and stopped. Brecht opened the door and the driver pulled out a shotgun and blew Brecht’s brains out. I calmed down after I realized non of this had actually happened and looked inside the car. Inside was a shy boy who tried his best to speak English. He looked a bit scared and decided to not take us with him after all.

A couple of minutes later a truck stopped. The driver’s name was Roman and he didn’t speak a single word of English. The entire conversation went like this:

– 20 minutes silence. I decided to look up some Russian words on my iPod –

After this I got so tired that I decided to shut up for the rest of the ride. 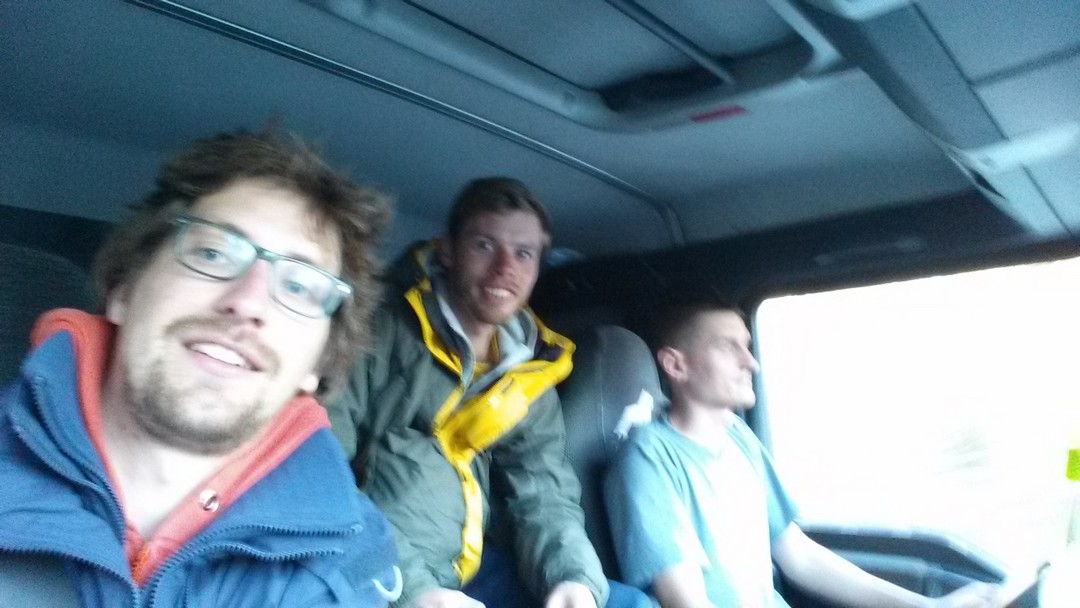 Roman in his truck

Roman dropped us at a construction yard and told us that there was a metro station 10 minutes away. The metro turned out to be almost 5 km away and, while walking thought the suburbs of SPB at dusk, for the third time today I thought we were gonna get killed. But we made it to our couchsurfing host eventually. Yay!

And  now enjoy some more pictures.