Velikiy Novgorod to Moscow (The Road of Death A.K.A. The Day We Got Robbed) – May 11

This morning, after a quick breakfast of champions, Sacha and Margo called a cab to take us to the edge of the town. Taking a cab was only a little bit more expensive than the bus and a lot faster. We got out of the taxi near a tank covered with flowers. When I pulled out my wallet Sasha said “Don’t even think about it!”, and Margo payed the driver. “It’s a present.”, he said. We offered to at least pay for their ride back, but they said they wanted to walk, so after a lot of spaseeba’s we where begging for rides once again, with the road of death imminently lurking.

After half an hour of waiting I headed towards a nearby bush to take a dump. Just after I finished dropping my last brick, I heard Brecht shouting my name to indicate that there was a car. I just experienced a Double Relief Combo! Awesome! I quickly wiped my ass and ran to the car. The driver, Boba (or something),  only needed to go a very short distance, but he could drop us at the first gas station on the M10, the express way between SPB and Moscow. Even though Boba spoke no English he kept talking and asking questions, to which I could only respond “Ya nee panemayoo.” (I don’t understand.) After I mimicked some of his vague gestures and faking that I understood by nodding yes occasionally, he finally realized that our knowledge of Russian was completely non-existent. He phoned a friend and I heard him ask something that ended with “Anglainsky?” But his friend didn’t seem to know any English either so we continued combining random gestures and basic phrases until he dropped us at the gas station. 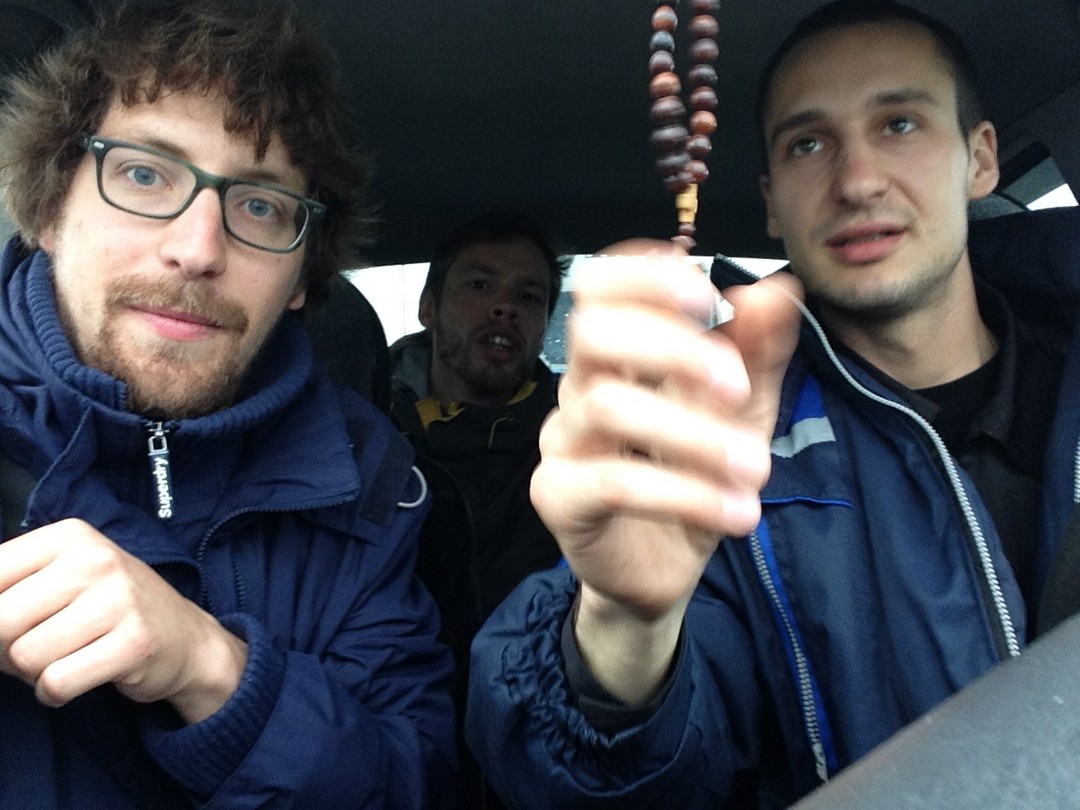 After an hour of thumbing, a ramshackle Lada stopped. In it we found the driver, Misha, and his sidekick, Sahid. After we asked “Moscow?” they said “Da”. I couldn’t believe we would actually get a direct 500 km long ride from these guys, so I made sure by asking “Kooda vui jeedeetje?” (Where are you going?), a phrase that Sasha had thought me in the taxi. Micha answered “Moskva.” so that was fat ah-yes (dik aja). 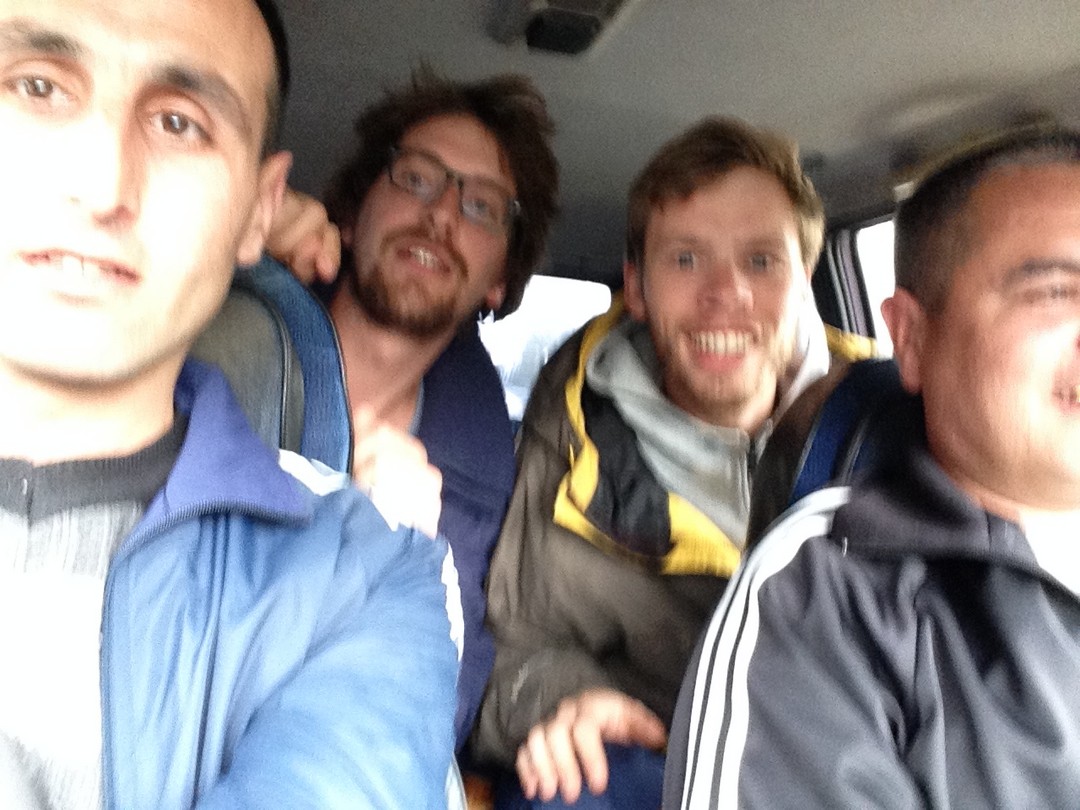 The ride was long and boring. The car was filled with gas fumes, there were no seat belts in the back, and it looked like the car would fall apart any minute. Non the less, the car had some high tech features on board, like electric windows and a radar detection system that sounded like the kind of alarm you would expect in a nuclear power plant, seconds before meltdown. Micha drove pretty fast but he kept to the rules, as long as you don’t consider driving over the soft shoulder to take over traffic that is already taking over traffic over the hard shoulder as a traffic offense.

We had tried to start a small conversation in the beginning, but Sahid and Misha weren’t very much into talking, not even to each other. So we tried to sleep a bit. Brecht managed to do so, but I didn’t feel 100% confident about these guys, so I kept checking my GPS to make sure they weren’t driving towards some remote area to mug us. (It turned out later that my spider-sense hadn’t been that far off.) The only time the guys talked to each other was when Misha asked Sahid for his little white tin in which he kept some kind of green substance that resembled marihuana, and 20 minutes later he spoke again to ask some water to clean his mouth.

After a while we reinitialized a conversation to indicate that we had to go pipi. During the five minute break they gave us some dry sandwiches. Later we stopped one more time to eat something. We paid for their lunch to express our gratitude for the ride, and then we set off for the last straight line to Moscow! It looked like we were going to make it to the capital before 17:00. That was without considering the enormous traffic jams caused by all the people returning home from the 9 May weekend.

We finally arrived in Moscow around 20:00. Micha told us to get out at a bus stop and made the peace sign while babbling something in Russian. I gave him a couple of pats on his shoulder and thanked him. But as I tried to get out he started yelling, still showing me the peace sign. I finally understood he was trying to say we owed him 2000 Rubles (about 40 Euro). After trying to convince him that he only wanted 200 Rubles we finally gave in and emptied our pockets. He was okay with taking 1600 Rubles, because we had paid for his lunch. Still, I felt mugged, raped in the ass, and left for dead by these guys. While walking towards the bus stop with hanging shoulders I realized I couldn’t find my iPod anywhere. We ran back in the direction of the car, which luckily seemed to have some trouble starting. (That’s what karma does to you if you steal money from hitchhikers.) After some searching, Brecht finally found my device between the seats.

Half an hour later we arrived at our couchsurfing host. Yulia lived in a cozy little apartment with her two cats, Masha (a British Shorthair cat from London who loved to lay on her back) and Chrusha (A Russian street cat, it’s name is short for Chrushenka, a character from a Dostoyevsky book). Yulia made us some super healthy food, and after some healthy candy and tea she transformed her couch into a luxury king size bed.

While laying in bed, I had some mixed feelings. I realized we made it to Moscow, the most eastern point of our trip, and in many ways our main destination. But it felt like we failed because we had been taking a train (SPB to Novgorod) and today we actually just took a taxi without realizing it. Still the “taxi” was much cheaper than any other form of transport we could have taken. And I finally comforted myself with the thought that we got robbed, which was actually pretty awesome, so I fell into a deep, satisfying sleep.